When I moved here in 1990, certain memories and convictions were seared into my mind. That Fall, there were heavy rains for a number of days that inundated the soil and filled rivers beyond their banks. The Skagit River was knocking on many people's doors; sometimes coming in uninvited.

I had heard that this happens regularly in parts of Skagit Valley. Since the early days of settling the region, dikes have been built to help tame the river and preserve people's homes and farmland. In 1990, one of the dikes on the north side of Fir Island failed allowing the entire island to be flooded.

Over the years, there have been many flood events, though nowhere as bad as the 1990 flood.

Holding Back the Water

For many decades, the primary method of holding back the water was through the use of dikes. Generally speaking, these work well to hold the water. They can, and do, fail from time to time.

When the rivers rise and threaten to crest over the tops of the dikes, armies of community members have come together to fill and place sandbags to build walls along the tops of the dikes, around city centers, and people's homes. It is heavy and dirty work often in the rain. Will power and determination help keep the volunteers working tirelessly long hours; often late into the night after already working their 'day job'. All to keep the rising and rushing waters at bay.

For many years, I worked in an office next to the Skagit River and would see it rise and fall throughout the year. There would be times where the river would get high. Whenever there was a warning of flooding, would always check the gang plank that was across the river. In normal times, there would be a bit of a steep angle going down to the dock. You could gauge how high the river was by how 'flat' the angle of the gang plank would get. If it was still doing down towards the river, things would be OK.

Over the last few days, the 'atmospheric river' that has been drenching the area has been draining into the area rivers. I took a trip to the old office to see the river. This time, the gang plank was going upwards from the shore to the dock.

Unlike previous years, there has not been the call enlisting volunteers to sandbag. That is not to say, that there is not sand bagging occurring. For a number of years, a lot of work was done reinforcing the tops of the dikes and building a flood wall along parts of downtown Mount Vernon. This wall is built along a reinforced foundation that allows the public to walk along the river, a place for public parking, and the holding of events in the plaza along the river. For the most part, the wall is not actually in place.

This wall was engineered to be open most of the time. During periods when there is a risk of flooding, the open sections get closed and reinforced; effectively adding many more feet to the top of the walking path and keeping the downtown safe. At least, that is the plan. This is the first time since they have been installed that the temporary portions have been used.

The Skagit is forecast to crest on Tuesday.

One of the challenges of the infrastructure is the debris that flows down the river. The branches and logs flow from upstream and have been known to build up at the bases of the bridges crossing the river. Part of the history of Mount Vernon involves the removal of a log jam at Mount Vernon that prevented boat traffic farther upriver. Currently, there is threats of upriver log jams breaking apart and sending debris into the bridge in downtown Mount Vernon.

This bridge has a dolphin that helps to protect the bridges support system. There was a large steel pipe of sorts that was placed at the leading edge to protect the dolphins wooden structure. Even with this, branches get caught between the slats of the dolphin which grab ahold of other branches flowing by. In addition to the protection of the dolphin, there is a string of logs that look like telephone poles that are chained inline along the rivers edge. These provide a level of protection of the debris floating down the river from running into and damaging the shore.

Back to Fir Island

Late today, there was an evacuation warning issued for residents of Fir Island to prepare for evacuation. Haven't heard any more yet, but I hope that the dikes hold and that flood damage in the area is minimal.

Off With Their Heads

To the disappointment of Tulip Festival tourists, many of the tulip fields have had their blooms cut off. But there's a good reason! 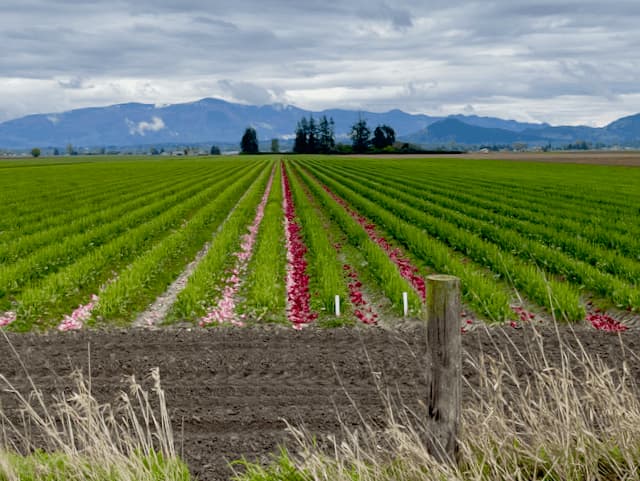 Images from around Skagit Valley showing some of the flooding that occurred November 2021.